ExpanDrive 3 development build 3003 is now available with support for Amazon S3 multi-part uploads. This enables much smoother and faster uploads along with the ability to upload keys larger than 5GB. We have also introduced a new connection layer to S3 which pools and re-uses connections to Amazon, drastically reducing latency while browsing around and interacting with the drive.

Additionally, SFTP users on Mac should see a massive throughput increase when on a high speed/LAN connection, 2-3x on average. Windows support for these SFTP improvements will be available in the next build.

ExpanDrive 3 has been under development a while now. It’s going to be an awesome release a ton of new features, improvements and fixes. But more on that in another post.

ExpanDrive has long included the facilities to auto-update itself to the latest version. We also give users the ability to try out beta versions if they subscribe to the beta release channel. We’re taking this one step further and rolling out a Development channel where you can get the very latest features and fixes as they are being developed.

Our goal is to get features and fixes into the hands of users as quickly as they are done and establish a tight feedback loop between our development and the needs of our customers. We plan to push in the new features and fixes on a near-daily regular basis.

We have just released the first builds of ExpanDrive 3, with most of the changes currently targeted at Windows client. We finally officially Windows 8 and have also built in some dramatic improvements to the responsiveness of the connection. Over the next days we will be rolling in our new multi-part transfer engine for S3 access for both Mac and Windows, dramatically improving the experience of uploading huge files. And like I said, this is just getting going.

We’re happy to announce ExpanDrive v2.4 for Mac and Windows. This is the first time we’ve released simultaneously on both platforms, which we’re fairly excited about and we intend this to be the pattern going forward, when applicable. You can grab it at at www.expandrive.com or via the auto-updater.

As usual, please send any questions/comments/bug reports to support@expandrive.com rather than commenting on this post.

We’ve just rolled out the ability to buy ExpanDrive using any existing Amazon.com account. Hopefully this makes getting a license that much easier, or that much easier to have your boss pay for a copy.

Interested in running Strongspace on your own hardware? We’re proud to announce  Strongspace Enterprise, a virtual-machine based solution that lets you run Strongspace on your own storage on your own network. If you’re interested shoot a message to enterprise@strongspace.com and we’ll get you up and running. In the future we hope to make this a bit more self-service but until we reach wider deployment we’d like to work with customers more closely.

Here is a great module for puppet contributed by Michael Hoffman, a Strongspace user. It eases deployment of the strongspace ruby gem and manage backups of linux/unix systems.

This module will automatically do the following:

I’m happy to announce our [Strongspace app](https://blog.strongspace.com/announcing-strongspace-app-for-the-mac) is now available for Windows. It shares the same [core](https://github.com/expandrive/strongspace-rsync) as our Mac client and it provides continuous backup within a 10 minute window – pushing only the incremental changes to Strongspace and taking a ZFS snapshot of your data on the hour.

Getting it going is as simple as selecting what you’d like backed up. 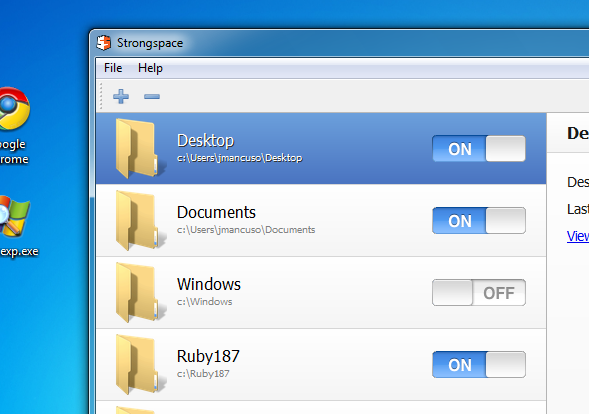 You can any folder on your machine and it gets pushed right out to Strongspace. This is based on [rsync](https://www.strongspace.com/help/basic-rsync-backup) and ssh (encrypted and compressed transmission) and the core is being developed in public on [GitHub](https://github.com/expandrive/strongspace-ruby). This is an early version and is likely to have a bug or two – send feedback to [support@expandrive.com](mailto:support@expandrive.com) and make sure to install the automatic updates as they come in.

You can now track the number of times a file or folder you share from Strongspace has been viewed. First head over to the shared links tab on your sidebar… 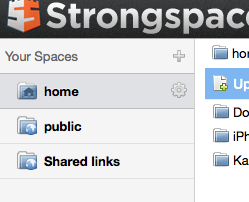 Now you can see the number of times the link has been viewed, along with an easy way to see everything you’ve shared as well as manager the links. Here’s an example.

As we’ve promised before, we’ll get password protection in there soon. If you have any other feedback on this sharing feature, leave a note in the comments.

Some important fixes for users whose text editors had been complaining of a file changed when it wasn’t – also a bunch of browsing and caching improvements that should really help speed up a few cases that have slowed down in our 2.0 release.

[Download ExpanDrive v2.0.9 here](https://www.expandrive.com/ExpanDrive.exe) or via the auto updater.

To connect a drive via the commandline:

To eject a drive via the commandline:

[Download ExpanDrive v2.2 here](https://www.expandrive.com/ExpanDrive.exe) or via the auto updater.